Son of a Witch by Gregory Maquire 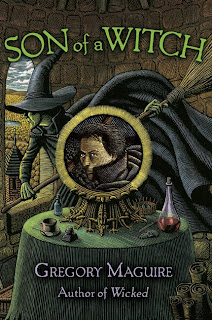 Buy It Now!
Son of a Witch:

In "Son of Witch" we follow the story of Liir, the boy who is probably Elphaba's (The Wicked Witch of the West) son. Nobody really knows for sure though, and he really struggles with his identity as a result. In fact, he usually just avoids all questions that are family related!
After the death of Elphaba, Liir strikes out on his own, looking for his missing friend, and trying to figure out who he is in the process. Along the way he meets Princess Nastoya, Glinda, and even the Scarecrow! He also enrolls in the army for awhile, where he learns a lot, but eventually grows disgusted and leaves.
Thing are developing politically in Oz during this book. They go through succession of leaders after the Wizard leaves, and the consequences to the people aren't always good. Liir becomes more a more integral part of this than he wants or would expect.
I think I actually liked this book more than I did the first one. That could simply be because Maquire had more room to play here considering Liir is a new character to the Oz stories! It was interesting to see his nods to the original books though. I'm glad that I'm rereading the original series right now too :D
Posted by Live, Love, Laugh, Write! at 3:36 PM

I'll admit that I've never read any of the Oz books, either original or these kinds. I take it they're all good reads?

I haven't read any of the books, but this one sounds like fun.

I liked this one a lot- it was very rich and, like you said, there was more here for Maguire to play with. But, for me personally, the ending was a letdown (I would have preferred a different one... and I'll leave it at that).

thanks for the great review! It's good to know, I have read Wicked and really liked it, he's such an intelligent writer. It's actually funny I read it at all, since I've never read the original Oz books, maybe I'll have to give them a try too! :D