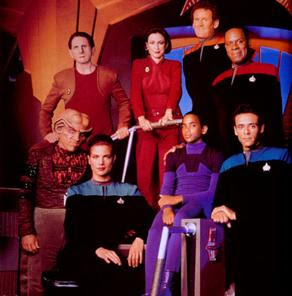 I love to watch things while I'm creating. Often that means watching things on-line, but I'm also blessed with a best friend who's Dad collects science fiction television shows! Right now, that means that my brother and I have borrowed the entire Star Trek - Deep Space 9 collection! We'll be trading the discs back and forth.
Currently I'm watching the first season. It came out way back in 1993, so I would have been 11 when I first started watching the show! I remember there were some episodes I didn't get to watch, at 11 I still got kicked out of the room if there was too much sex in the show, and I don't mind that my parents did that one bit! Fortunately I got to watch quite a bit of it!
It's amusing to go back and watch the first season. Not only am I viewing this as an adult, which is very different, but it's funny to see all the characters looking so young and new to their stations! Some of them don't look or act that different, but many of them have different hair cuts, Jake Sisko is played by a different actor than in later seasons, and the crew is still settling into their different roles on the station.
One character that has always fascinated me is Jadzia Dax. Not only is she a strong female character, but she has the exotic characteristic of actually being two personalities joined as one. Jadzia, the woman, and Dax, the symbiot within her. The symbiot has lived for over 100 years, transferring from one Trill (Jadzia's race) to another. It's most recent host being a man named Curzon. A man with a close friendship to Jadzia's current supervisor, Captain Benjamin Sisko.
This creates many interesting complications in Jadzia Dax's life. For instance, her relationship with Sisko has necessarily changed. Also, through the memories of the symbiot, she has much more life experience than her physical years would normally allow for. They explore this topic in the episode "Dax" where Jadzia is brought to trial for the supposed crimes of Curzon Dax.
Posted by Live, Love, Laugh, Write! at 2:56 PM

Yay! Star Trek! Haven't seen DS9...maybe one part of an episode, but that's it. Yay for getting to watch them all.

I agree how rewatching a series is fun, just be seeing the cast gel in later seasons.

After original misgivings that DS9 was "replacing" ST:TNG, I came to love the show. Lots of Trekkies are very negative about the series, usually because there wasn't enough "action" and exploration. But the show was great because of the characters, the actors, and the writing - that's what kept me coming back week after week! How does it hold up after all this time for you? FYI, Jake Sisko was played by the same actor throughout the series - except for a single episode that was about "grown-up" Jake. http://www.imdb.com/title/tt0106145/fullcredits#cast

I felt the same as Mysie when it first came out...didn't take long for me to come around...but by then I had my son & was watching tv less...maybe I need to Netflix it & see them all :)