Sometimes All You Can Do Is Laugh... 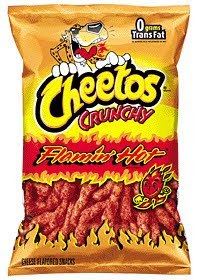 As you know if you've been following my blog, I had to move into my parents house temporarily because of the paint fumes from them re-painting our apartment complex. Well my dear hubby has stayed at the apartment because he needs to have his computer for programing purposes. Which has been hard, but he's coming over every evening, and I'm actually handling better than I thought I would.
My hubby on the other hand...
Well, he's not too great at taking care of himself. Eating wise that is. Most of the time he eats because I put food in front of him! Other than that...it's just too much work to put down his homework (or computer games).
This means that since I've been gone...he's pretty much been eating the dinners here at my parents house and very little else! Admittedly, part of the problem is that he ran out of some basic supplies, but when I tried to suggest he go shopping he'd tell me he didn't have time.
Tonight, I gave up. He didn't come over tonight. I assumed it was because he still wasn't feeling well (I have other suspicions now). Of course, I also figure he's not feeling well because he hasn't been eating enough...
Anyway, I was actually feeling good (for once!), so Mom and I decided to take Moses some dinner and stop at the grocery store at the same time. I picked up some basic supplies and then some things that wouldn't require much preparation. Milk, cheese, soda, hot pockets, frozen burritos, and some cheese its, oh, and bacon.
Mom and I got to the apartment and guess what??? Moses had finally gone to the grocery store! I think that was the real reason he didn't come over tonight, but he hadn't bothered to say anything, it wouldn't have occurred to him. So guess what he got? Milk, cheese, soda, frozen pizza, and Cheetos.
Hmm...sounds like a pretty similar list doesn't it?
We just had to laugh. I guess I don't need to worry about him having enough to eat until I get home now do I? Wouldn't it just figure that I finally give up on him taking care of himself right as he finally decides to?
Posted by Live, Love, Laugh, Write! at 8:32 PM

Why does this sound soooo familiar?

I have my hubby and 2 grown sons at home right now. I think they'd all starve if I didn't shop and cook for them. The great part is I can threaten to go on strike if they don't do most of the chores around the house which leaves me time to bead!

LOL...this is too funny!

Definitely too funny. Well, at least you're both on the same page! LOL

Well, that's men for you! They are capable, they just don't want us to know!