The Marvelous Land of Oz by L. Frank Baum 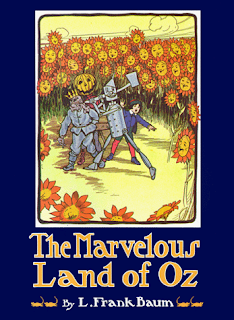 Buy it Now!
The Marvelous Land of Oz

"The Marvelous Land of Oz" is the second book that L. Frank Baum wrote about the delightful land of Oz. It came out four years after the first one because, well, he originally had no intention of writing any more! He received many letters asking for more books though, and he finally gave in and kept writing them.
In "The Marvelous Land of Oz" we meet some new characters and rejoin some of our old friends. Tip, a young boy, is the main character of this book. He's grown up with a mean old sorceress, but after the accidental creation of Jack Pumpkinhead, he runs away. Tip and Jack get into many adventures on their way to the Emerald City, where the Scarecrow now rules. Unfortunately they arrive right as a bunch of girls, lead by General Jinjur, decide to take over the city!
Tip and Jack ended up joining forces with the Scarecrow and the Tin Man to win back the Emerald City. Along the way a flying Gump is created, we visit with Glenda the Good Witch, and the long lost Ozma is finally found! I had a lot of fun joining this motley crew on their journey and I'm sure you will too.
Posted by Live, Love, Laugh, Write! at 4:31 PM

I haven't even read the first oz book! Maybe I should.

Although he was never to enjoy the success he had with his first Oz book, Baum sure tried hard with this one (the second in the series). I like this far better than the first, more famous work. It starts off, if I remember from reading it 30 years ago, with Tip living in a cottage deep in a forest in Oz. The witch who keeps him is set on turning him into stone, so Tip must escape. This sets up a whole series of wonderful adventures and interesting characters. The Pumpkinhead character is my favorite. If only someone like Tim Burton would get a hold of this and turn it into a film, then maybe the whole Baum Oz series would get as much recognition as say the Potter series is now getting.