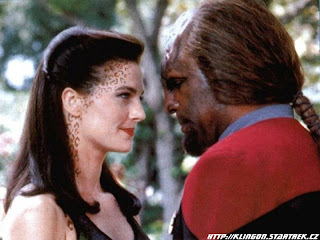 Season 4 of DS9 starts off by adding Worf to the crew! Worf is brought to DS9 to help with the negotiations with his fellow Klingons. When Sisko learns that Worf is considering leaving Star Fleet because he feels adrift now that the Enterprise is gone, he asks him to join the team on DS9, and fortunately for all of us Worf fans, he eventually decides to stay!
Worf adds a dry sense of humor to the show that is a great contrast with Bashir and O'Brien's more boisterous attitudes. We also see a lot more Klingons in general now that he's joined the show, something we can all appreciate. Worf and Jadzia also quickly begin to form a friendship since Dax's former host, Curzon, used to be an ambassador to the Klingons.
Season 4 had a lot of episodes that were charged with emotion, and sometimes even controversy. In this season we meet Gul Dukat's daughter Ziyal. Ziyal forms a tight connection with Kira, forcing Kira and Dukat to have an uneasy truce, as they both love her dearly. We also have the infamous "lesbian kiss" episode in which Dax runs into a former lover, and discovers that the connection is still strong even though both of them are in new (and female) hosts.
The pending conflict with the Dominion is further developed in the season, first with the shocking revelation that there is a changeling on earth, serving in the government! This creates a lot of fear as people realize how deadly the changlings ability to take any form truly is. It also creates conflict as Sisko struggles to protect Earth, and its citizens (most notably his father) resist Starfleets necessary actions as invasions of their privacy.
The season ends with a shock as Odo is judged by the founders because he was forced to kill another changeling. He is the first to murder a fellow changeling in the history of their species and the punishment is severe. They turn him into a solid, effectively barring him from the Great Link, and leaving him bereft.
Posted by Live, Love, Laugh, Write! at 7:37 PM

I think Josh is going to be renewing our Netflix soon, so I'll have to start renting DS9. Which is good, because I'm almost out of TNG to watch. :)

This post was a pleasant surprise. I grew up watching Star Treck and Deep Space 9. Funny, I know but this brought back a lot of sentimental feelings. I'm with Merily, I think I will have to rent some DS9.