Some Explaining to Do

So I'm guessing from the comments I got on my award post, I have some explaining to do! I decided I could either answer each person individually, or just put up another post and explain myself :P So here goes!
1. First bone I ever broke was actually not mine...it was my cousins finger! Sorry Bonny!
We were about 7 I think, and getting ready to head up to our Granny's for a two week visit. Ever slammed your finger in a car door? Yeah, I didn't see her hand and I slammed the door. Broke her finger...and it was her birthday! Believe me I PAID for that one!
2. I've danced on the side of the free way. 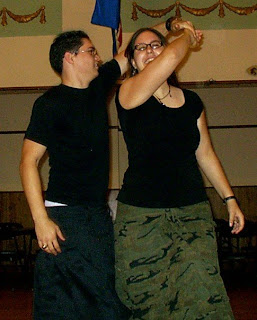 Ok, this shot obviously isn't on the side of the free way, but it's one I love! I'm dancing with Aaron, and that's a black kilt he's wearing, and no, that's not his tidy whities peeking out - it's an under shirt! Anywho...back in my healthy days I was a swing dancer. The free way story comes from a time when some girls and I broke down on the side of the free way on the way out to go dancing. Since we had to wait to be rescued we decided to entertain ourselves! And what better way than by dancing? I'm just glad we didn't cause any accidents...
3. I once performed at the base of the Space Needle.
I spent a year as the co-leader of a drama group at my church. Among other things we did some street performances. One of them just happened to be in a park at the base of the Space Needle!
4. I had an article published in an Australian Craft Magazine.
This was earlier this year - and I was so excited!
5. My brother lives in Kathmandu, Nepal.
I miss him like crazy. He should be home in January!
6. I was once an extra in a movie.
This is a dancing thing again! I don't know if I made it into the final movie, but I got to dance as an etra in the indie film "Everyman's War." It's just finally coming out now...two years later! Don't know if I'll get to see it or not, but it was an experience to remember!
7. I've never been camping.
It just never worked out for one reason or another. Don't really see myself doing it at this point either :P
8. As a girl I raised pigs for food instead of having pets.
My Dad grew up a farm boy, and we lived on half an acre of land. He didn't really believe in animals unless they served a purpose, so instead of a dog or cat, I raised a total of 6 pigs! They tasted good too :P
Posted by Live, Love, Laugh, Write! at 8:03 PM

It's nice to learn more about your online friends. thanks for sharing.
Libertydoll

Glad you cleared some things up! Your explanations made it all the more interesting too! Well, except for the last one and of course you know why.

You look like you are having so much fun dancing!

And, if you were going to eat the animals, I am VERY happy that they were not kitties or doggies :P

* dancing on the side of the freeway...I can totally see that!
shhhh....and don't tell Pigatopia about the piggies :P
and I ditto Tulip :)

lol...if I ever get up your way...we're definitely gonna have to hang out :) So many fun stories!

I'm gonna have to take you camping, girl!!!