One of my personal goals has been to take more pictures of random things in my life. Well - I did better this month than last month - but I still only have pictures for about half of the days! Oh well - better luck next month? I blame my migraines for my lack of photo taking inspiration. It's hard to think of things to take photos of, or to care about taking photos, when your head is pounding away. The mosaic below is made of pictures from my Flickr set "February '09 in photos." Go to the set if you want to hear more of the stories behind them! 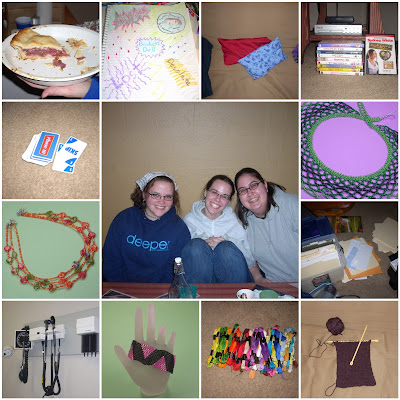 The last photo I took last month, the one for February 27th, was a shot of the scarf I'm working on. It's my second ever knitting project and I'm having a lot of fun with it! But their's more to it than that...I have a story with this scarf now! 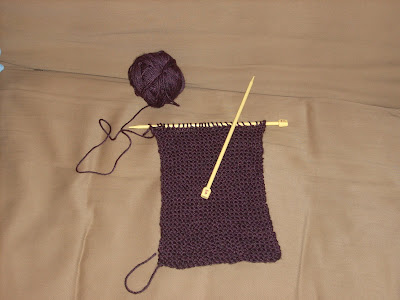 I had a couple of doctors appointments on Friday that my Mom drove me to. I had no clue what to expect from the first appointment, so I purposely had set it early, to make sure we'd have enough time to drive out to Beaverton to see the Natureopath I go to. Well, we had enough time alright, we got there over an hour early! Not a problem though. Mom and I have spent enough time in doctors office that we are always prepared. She had a mobious shawl she was crotcheting, and I my scarf to work on. So we settled down, started chatting, and let our fingers fly.

Before long Dr. Wager's next patient came in. Now, to understand this, you need to realize that Dr. Wager is a sole physician practice, their's no one else in her office, not even a receptionist! So the first thing this poor man thought when he saw me and Mom was that he'd shown up at the wrong appointment time. We quickly reassured him that we were just early, and began chatting. He was a nice guy, and we had a lot of fun until it was time for his appointment.

About a half hour later another gentleman came in and sat down. We quickly assured him that we were early before he could get worried like the other gentleman, and he sat down and settled into wait. After a few minutes he looked at us and asked, "Is one of you left handed?"

"No," we responded in unison, very puzzled as to why he would think one of us was left handed.

"Well it's just that it looks like you guys are doing that differently."

It's a good thing the poor guy had a great sense of humor, because as nice as we try to be, my Mom and I couldn't help but laugh! We explained to him that it was because we were doing very different crafts, and he laughed along with us. It kept me chuckling though for awhile :) So that's why my knitting became my picture of the day!
Posted by Live, Love, Laugh, Write! at 2:18 PM

Hehehe knitting in public can be so much fun sometimes. It's cool that you can hang out with your Mom like that too. My Mom knits and crochets also, but we rarely get to do it together LOL.

like the knitting... reminds me of my crochet... just one LONG chain stitch! Piece of pie looks good too!

You are so talented! You go girl~

You got so many great shots...even with your migraines :)
I love the color of your scarf...can't wait to see it done!