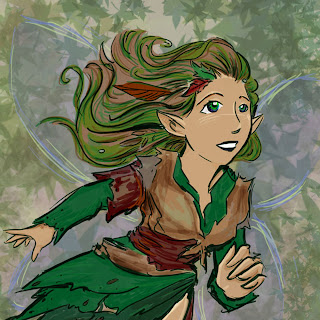 I had planned to post this yesterday afternoon or evening, but the day ended up full of things I wasn't expecting, and thus it didn't get done. Before I start up the regular posts of the story, here's the back story of what's already been published!
I started writing my story, Aria's Quest, in February of last year. I wanted to write a modern fairy tale, and I wanted to work on piece of serial fiction to publish weekly on my blog. It's been a long hard road, and I recently had to take a break from it, but it's also been a lot of fun! I decided that I need to write up a short synopsis of what's happened in the story so far for anyone who's just joining in on the story.
Aria is a 17 year old Woodland Fairy from a large family. She's a bit precocious, and has a thirst for knowledge. Among the woodland fairies it's required that you complete a quest to be recognized as an adult in the community. This quest is assigned by a counsel and they are the ones who decide when a fairy is prepared to embark on their quest.
The quest consists of the fairy traveling into the city, finding a human to work with, and finding a way to improve that human's life. It's not required that the human be aware of the fairy's influence in their life, and many fairies chose to remain invisible as they go about their quest. This approach never appealed to Aria though, and she spent the first portion of her quest simply searching for a "true believer."
A "true believer" is a human who believes, truly, in things such as magic and fairies. It's not required that a human be a true believer for them to be able to see a fairy, but it certainly makes it easier! Aria wanted to actually work with the person she's helping, so she searched high and low until she found just the right guy!
Along the way, while she searched, Aria made some friends. She first met another fairy named Robyn, and he helped her find a place to stay, with his foster parents Darryl and Gina. Darryl and Gina are a dwarven couple that manages to "pass" as human and live in a local apartment. They make Aria feel right at home and provide a lot of support for her on her search.
Aria finds a gem of a true believer in a young man named Joey. Joey was originally a country boy, and he came to the city to find his sister, who has gone missing. As he looks for her he works at a local church as a janitor, and that's where Aria originally finds him.
When Aria finds out about Joey's missing sister, Molly, she knows that she needs to help Joey find her. It scares her a little bit, because it's something that is so vitally important to Joey, but she knows deep inside that it's what's right. So she sits Joey and down and explains what she wants to do to help him, and Joey starts by telling her a little bit more about Molly.
I'll start publishing regular portions of the story tomorrow.
Posted by Live, Love, Laugh, Write! at 3:18 PM

Hurrah, Aria returns! I think I still owe you at least a sketch. Let me know what scene, ok?

I love fantasy or reality stories. They make my day.