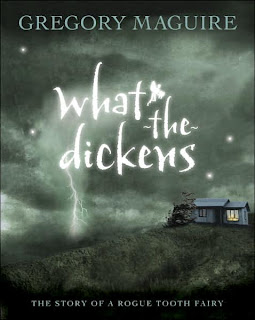 Buy it Now!
What-the-Dickens: The Story of a Rogue Tooth Fairy

"What the Dickens" is an imaginative story about a rogue tooth fairy named, strangely enough, What the Dickens. It's unusual, but believe it or not, it does make sense when you read the book! I'll let you find out why for yourself.
Gage, a young man, is the one who tells us about What the Dickens. Gage is taking care of his three younger cousins during a hurricane. He had been visiting when the storm took out the power, and the children's mother needed that power to keep her insulin fresh. So the children's parents take off to find medical help, and Gage stays behind to protect the kids.
The situation for Gage and the kids is pretty bad, and to take their mind off of it, he tells them the story of What the Dickens. Is it a true story? The children never really can figure that out, but it's definitely a captivating story!
Have you ever wondered how one single tooth fairy manages to collect all those teeth? Well the answer is that it's not one single tooth fairy, there are whole colonies of them! And when one is born away from the colonies, he finds himself with no identity, and no way of learning who is is. Eventually, though, he begins to learn about the world, and he meets another tooth fairy. That takes him on a wild adventure where he meets Gage, life and limb is in peril, and there is lots to be learned!
Posted by Live, Love, Laugh, Write! at 4:27 PM

This sounds fun! Kinda reminds me of the Tooth Fairies on Discworld.

I'll have to give that book a try. I've been wanting to check out Gregory Maguire, but couldn't look at any of his...well, high-profile fanfic, I guess, or..um, alternate unverse books? I don't know, what's the fandom name for that sort of story? Because I've seen it done just so often, and didn't feel I'd be able to give his version a fair shake. But hey, tooth fairy story! That I can read unbiased, yay!