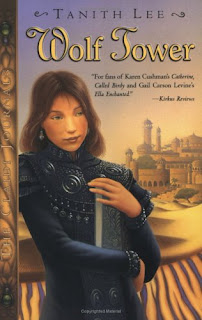 "Wolf Star" is the second book in the "Claidi Journals" by Tanith Lee. It continues, in journal format, the story of the young woman Claidi. Claidi grew up as a serving girl, but was given an opportunity to escape that life, and she spent the first book on a grand adventure traveling.
As this book starts Claidi is preparing for her wedding. Unfortunately the wedding never takes place because Claidi is kidnapped and taken away. First by balloon, and then across the sea by boat, until she reaches a cliff that turns out to be a palace. Claidi is left there by her captors, and she soon discovers that there are few people there at the cliff, but not much hope of leaving either.
The only other occupants of the cliff palace are some serving robots, a young girl who cries to water the plants, some mutated animals, and Prince Venn. Nobody seems to be able to tell her why she is there, and while Prince Venn does seem to know, communicating with him is like banging her head against the wall.
Eventually, though, Claidi does manage to make friends with Prince Venn, and the two of them try to figure out how to help her and more about why she's actually there. This involves a search through the palace, which is a much harder task than you might think, because the rooms like to randomly move about! It's a crazy adventure, but it's the first step in Claidi finding a way to go back to the man she loves.
Posted by Live, Love, Laugh, Write! at 12:06 PM

NOOOO! You're taunting me with this wonderful series that I haven't read yet. Nooo!!!

I love Tanith Lee! I actually haven't read this series. I must remember them.