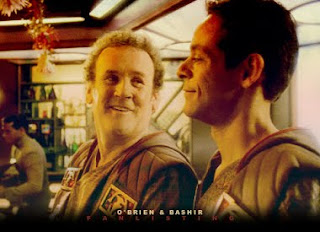 Deep Space 9 Season 3 was all about the relationships for me, well that and the development of different characters and the concept of identity. I'm sure other people would probably see the season differently, but that's what stuck out at me the most. Odo finding his people, Bashir and O'Brien's friendship, Kira and Vedek Bareil, Garak and Bashir, and they even have an episode all about relationships called "Fascination!" It's a fascinating episode (pun intended) where person after person starts hitting on some one you would never expect! Vedek Bariel on Dax, Dax on Sisko (ok that was expected), Kira and Bashier, and the list goes on! It's a highly entertaining episode.
They also, like I said, spend a lot of time on the concept of identity. The season starts right off the bat with Odo finding his people, and that escalates his turmoil about who he is, a concept he spends the rest of the series exploring. Is he defined by his physical heritage, or who he's made of himself, or a mixture of both?
One of my favorite episodes was one called "Facets" where Dax asks various residents of the station to join her in the Zhian'tara ritual. The Zhian'tara ritual is traditional for joined Trills because it gives them the chance to meet the former hosts through a process where their identities are temporarily psychically transferred into another person. Sound confusing? It is a little, but it was also histerical! It was fun to watch the different actors getting to play different roles, and of course I enjoyed learning more about Dax!
How can I talk about identity and relationships with out mentioning the episode where Kira is transformed into a Cardassian, Bashir's trip to the alternate universe, and Bashir's aging episode? Well..there...I've mentioned them and now you'll have to go watch the season to find out more!
Posted by Live, Love, Laugh, Write! at 7:23 PM

DS9 needs to be in my Netflix queue I think :) I am on Stargate now & just saw O'Brien as a not so nice guy - more likeable in DS9

I was scrolling through my RSS feeds and I did a double take because I was all "Wait, was that O'Brien?" LOL!

Man, I need some more sales so I can renew my netflix; I want to see all these seasons of Star Trek I haven't been able to watch!