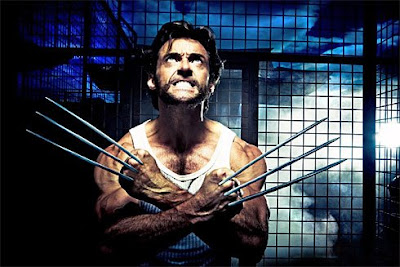 Saturday morning my brother and I went out to see X-Men Origins: Wolverine, and we had a blast! I think they did a really good job on this movie. Now, to tell you my background with this series, I'm only a minor geek. While I've seen the original X-Men series (several times), I've never read the comics or followed any of the rest of it. My brother, however, is a major geek and knows the comics and just about everything related to the X-Men!
Overall the movie was pretty true to the X-Men cannon. I noticed one or two small things they missed, and my brother filled me on the rest! Most of the ommissions could be blamed on trying to keep the movie going though I think. If your not a major geek you wouldn't notice most of them!
One thing that suprised me was that they did really tone down some things. I expected the scene where the fill Wolverines body with adamantian to be much more gruesome than it was. In fact, I expected to have to turn my face away during that scene (I get squemish!) and I didn't have a problem with it at all.
I really enjoyed the character development of the story. After all, that's what the movie is all about! The original trilogy left us with many questions (if you don't follow the comics that is) about what happened to make Wolverine who is. His past was a mystery made more profound by his lack of memory. All my questions were answered well, and the progression made a lot of sense!
I also enjoyed getting to know some new mutants. One that really surprised me was that one of the mutants (John Wraith) was played by Will i. Am of the Black Eyed Peas. I'm always a little leery when I see a musician or athlete jump into the world of acting, but I think he did a really good job. I was impressed at least!
The only thing that bugged me about the movie was the character of Victor, ie, Sabortooth. He seemed much more intelligent in this movie than he's portrayed in the original trilogy. My brother's explanation for that is that Sabortooth embraces his "animal" side more as time goes on. So by the time we meet him in the original trilogy he's barely a man anymore. I can see that as making sense, but I think they portrayed his character as too creepy instead of wild in this movie.
Did you know they are planning more movies in the Origins series? X-Men: Magneto is due to come out in 2011! I'm looking forward to it :)
Posted by Live, Love, Laugh, Write! at 9:21 AM

I was wondering if they were going to do more of the 'Origins'.

Thanks for the helpful review.

Great Review Ruthie, without giving anything away! Your brother is very wise in the explination of Sabertooth, as he ages he leans more and more to the wildside, which is shown in the movie, as he gets out of control! I liked the movie a lot too, we saw it as a family Thursday at Midnight (really friday AM)

We went to see this movie this past weekend also. We enjoyed it! We watch almost all the comic book movies. I hardly read any of the comics either, but my husband has.

I actually liked the guy who played Sabortooth better in this movie than the other ones...lol.

We went to see it yesterday and loved it. I, too, was curious if they'd be making another Origins film...thanks for the info!

Magnito sound awesome. Ya, I too went to see this, and thought that it was very good. I now wish that I had read more of the comics, but I think that they did an awesome job.

Would have liked to have seen Gambit a bit more, but o well.

I can't wait to see the movie! Your review has me even more hyped now :) And more Origins movies? Bring 'em on!

I am sooo looking forward to seeing this! Although it may not be until it's a rental...we go to very few movies in the theater & I am saving this "season" for Start Trek...but I may have to make an exceptional now & see this big screen too...after all - we share very similar tastes...so I am sure I'll like it :) And hey - all Wolverine, all the time? YUM.M.Y.

All good to know I will see it like everything else when netflix gets them we have a huge screen with a projector we don't need a theater. I am waiting on Rise of the Lycans, I guess I will have a long wait for Wolverine if it is good.

Great Review. My hubby saw it by himself he says I probably won't like it cause I'm too much of a Wolverine Geek ;D

great review, now I know it's worth the price of admission! :D