Aria's Quest - Robyn has an Idea 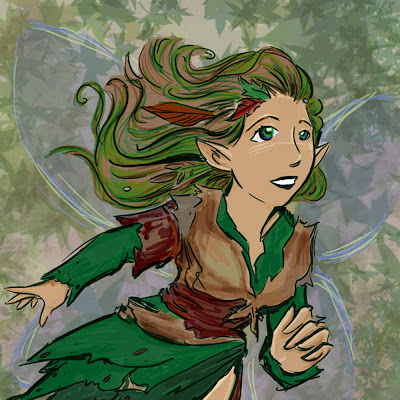 Section 2
Searching
Part 8
Robyn has an Idea
It was tempting to head back to “Brew it Up” again to watch the people, but Aria knew she’d become too fascinated and forget to work on her quest again. So she flew in the opposite direction today; looking for anything that might catch her eye. It was hard to know what to even look for. How do you identify a place a true believer would hang out?
True believers really weren’t that different from regular humans. They ate the same food, lived the same lives, they simply also had a belief in magic and all that accompanies that. If anything their lives were richer and full of wonder, but they still had the same needs for food, shelter, and security.
It was a long fruitless day for Aria. She was feeling slightly discouraged by the time she got back to Gina and Darryls, but she quickly perked up when she saw who was sitting on the breakfast table. “Robyn! How are you?” She exclaimed.
“I’m doing great! How’s your quest going?”
“Well…” Aria tried frantically of a way to put a positive spin on the situation.
“That well eh?”
“Well it’s not that it’s really going bad, I just haven’t found anyone yet.”
“And that’s not bad?”
“Well, ok, yeah it is, but I’ve been learning a lot and figure that has to be good right?”
Robyn laughed, “That’s a great way to look at it! What have you learned about?”
“Coffee!!!”
Robyn started laughing so hard he fell from the edge of the table and hovered next to it, still shaking with laughter. “And what did you learn about coffee?”
“Oh it’s wonderful! Your Mom made me some for breakfast this morning. Well not for breakfast, there was food too, I think.” Aria broke, off slightly confused, “I know I ate something! Anyway, it was really good, and humans drink it all the time! I don’t know why we don’t drink it back home.”
“Coffee’s a good thing to learn about I suppose. I certainly enjoy my coffee! So what are you going to try next?” Robyn asked as he settled back down on the table.
“I don’t know. I flew all over today and tried so many strange buildings. No one noticed me though. No matter what I tried. I know I should have some sort of plan other than just flying aimlessly, but I just don’t know enough about the city, so tomorrow I guess I’ll just look for more places I haven’t been.”
“Have you gone to any of the pubs?”
“What’s a pub?”
“Well you woodland fairies have ale right?”
“Of course!”
“Pub’s are places humans get together to drink ale and other strong drinks.”
“Why would I find a true believer there?” Aria asked with her nose wrinkled up in confusion. Robyn paused for a moment, distracted by how cute she looked when she did that, and then answered her.
“Well some of the pubs are designed to reflect the old countries, like Ireland, and the Irish are famous for their belief in the ‘wee folk’ as they like to call us. So stands to reason that you might find someone there.”
“Oh, well, can you tell me where some are? I’ll check them out tomorrow!”
Robyn shook his head at her. “Not tomorrow, tonight. Pubs aren’t open during the day. And I’ll do you one better than telling, I’ll take you myself.”
Posted by Live, Love, Laugh, Write! at 1:39 PM