The Etsy Bloggers Carnival this week is:
"What is your favorite fairy tale? Any parallels to real life?"
I'm taking a slightly different approach to this. I'd like to tell you a story. It's called...
Snow White meets Cinderella and Snow White and Cinderella meet Rambo 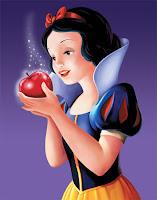 "One day Snow White was walking through the forest.  She came across a beautiful blonde young woman picking flowers. The two of them started talking and they become close friends. Snow White and Cinderella would do everything together!
The two girls were at Snow White's house one day when they saw a bloody man crawling up the hill. Cinderella helped him into the house while Snow White found something to hold over the hole in the man's. It saved his life. His name was Rambo and they all became close friends."
Ok - maybe not my best writing - but that's all I remember.
Remember you ask? Yes, remember. It was something that my cousins and I play acted once when I spent the night over at their house. I don't know why I remember it so vividly, but the story has always stuck in my head. I was Snow White because of my dark hair (although I had a tan), and Bonny (who's 4 months older than me) was Cinderella with her blond hair. The two of us have never looked like we're related!
We'd been playing around for awhile when Mark (5 years older than us) decided he wanted to play with us.  He insisted on being Rambo and we had a lot of fun "nursing" him. Can you guess what I held against his head to hold his brains in? The top of a smoke detector! I have no clue why it was lying around in the hallway within reach, but that's my cousins house for you! With four boys in the house things could get interesting :P

That is so cute!
I remember some things more vividly then others when I was little.
Like how me and my friend would play school all the time and later when we didn't want to play the normal school, we would play 'hip hop' school. Lol

Its fun to remember those childhood games, we often played The Wizard of Oz!

That's hilarious! It's funny how it doesn't matter if things "go together" when we're kids-- as long as it's fun, it's all good!

love it! and holding one's brains in is always a nice gestures among not only friends, but strangers as well :)

Ha! Love it! Way to incorporate dissimilar tales-- and some of those old fairy tales don't make more sense anyway!

I love this combination...if you kept at it you could give the Brothers Grimm some competition!

Hysterical! I didn't have any girls to play with while I was growing up. Thank goodness Star Wars had a princess or I would have had to play a droid.

I don't have a good memory, I wish I did remember more things like this. Kids have such vivid imaginations.

go figure - of course the bloody hero gets nursed by the two beautiful maidens! Just glad the trio all lived happily after!