Moving is a Mess!

The last pictures I showed was of my "blank slate." Well, the problem with moving is that before you can make the blank slate pretty, all the "crap" has to get piled in! So here's the couple of shots I got on the day of the move! I kinda forgot about taking pictures for the most part. Because of that I don't have any pics of everyone hard at work...
The bedroom mess. 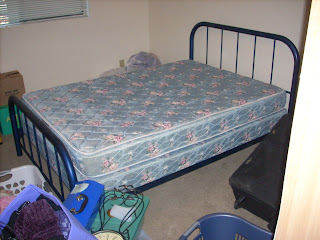 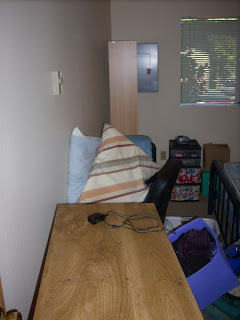 Tons of boxes in the living room! 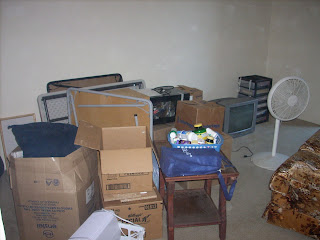 The Cuddle Rocker and the Futon in the living room. 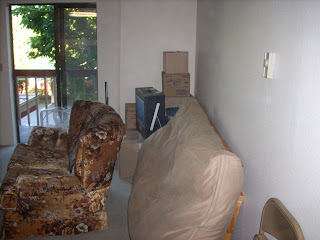 I think I told the story of the cuddle rocker? Someone who was moving out gave it to us! I love it :) Kinda ugly - but comfortable - and that's the important part! To the right of the picture you can see mattress for the futon. We gave it back to its original owner, but it took a few days before she was able to pick it up. Which meant it was a few days before we could arrange the living room because it took up a bunch of space! That's ok - we had plenty to keep us busy :) It's all pretty and arranged now! I'll get pictures of the apartment set up sometime next week :)
Posted by Live, Love, Laugh, Write! at 3:32 PM

Moving is certainly a mess but it sure is nice when everything is in it's place. Can't wait to see how it all turned out!

Lovin' the in-process pics...can't wait to see it all done :)

that's nothing...well, unless you're living in it :P
here's to hoping arrangement faeries come by tonight & put stuff away :)

Be sure to get your beading area set up soon :)

Sing it, sister! I'm still living out of cardboard boxes. At least I have access to my books, cooking, and clothes! I'm hoping to have things done this weekend. HA, right? :)