We had a lot of fun on the 4th of July! It was great, because I was actually able to do something for once :) I don't get out of the house except for errands and doctors visits that often...
Anyway - I made a yummy fruit salad for the event! And every last bite was eaten! Blueberries, strawberries, fresh pinapple, bannana, and mango. Yum :) I love fruit salad - have I ever mentioned that? 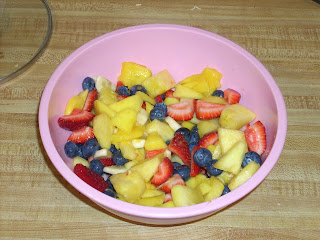 This is how we spent most of our evening - on the lawn talking and playing games! Well, one game. I think it's called Surro? Not 100% sure, but it's easy and fairly mindless, and we had a ton of fun! 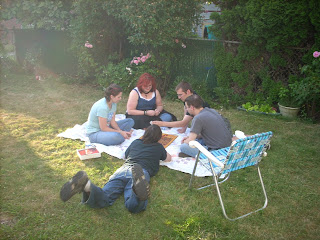 We also got in a game of "make Kat think we're going to tickle her."
Highly hilarious for all of us, but poor Kat... 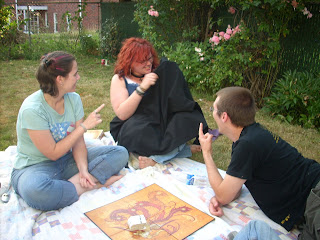 And I have to get in a shot of my dear hubby! His hair is getting long... I like it though! 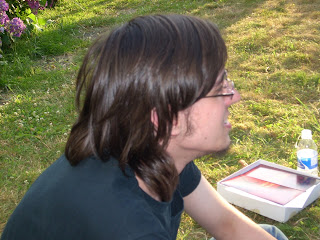 So that's my 4th of July. No fireworks, just friends and food :) It used to be that they had a huge fireworks display at Fort Vancouver. Now I couldn't go to the actual Fort because that close there was too much smoke and I'd have an asthma attack, but you could see the display perfectly fine from the lawn of Clark College. That's why Bethie's house was always party central. We'd all park in her neighborhood and avoid the traffic at the fort, hang out and have food, and then walk over to Clark to watch the fireworks! Sadly they've cancelled the display for financial reasons...but we still had the party! Last year when we were up in Ellensburg was the first year I had gone with out going to Bethie's for the 4th in a LONG time, it was really good to be back :)
Posted by Live, Love, Laugh, Write! at 12:00 PM

Looks like you guys had a lot of fun! :D

lol, speaking of long hair, my fiancé had long hair (like halfway down his back long) for a while because I love long hair on guys, but lately he's kept it super short. He's still cute, but I liked it better long. ;)

So glad you were able to get out and have a great time :)
Food and friends...what more could you need :)

Ohhhh my goodness. Mo looks like Ri with that hair.

What a great way to spend the holiday! Glad you had so much fun!

friends and food - sounds perfect to me :)