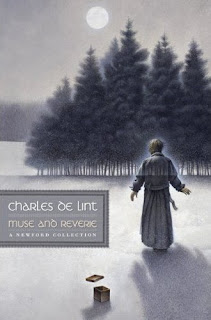 "Muse and Reverie" is another anthology of short stories by one of my favorite authors - Charles de Lint. It's one of his newest books, published just last year, and it's set in the town we all know and love, Newford. I was kind of sad reading the forward though, he tells us that he's taking a break from writing about Newford, and I love his stories set there! But he's not taking a break from writing, he's going to move on to explore new things, so I can still be excited about that. Also, he tells us in the forward that he has a folder of stories about Newford left that can fill another anthology, so even if he never goes back to writing about Newford we might still get some more stories!

"Muse and Reverie" contains 13 stories. All of them have originally appeared in other places, and that meant that one of them was familiar to me. I didn't mind though, because "Somewhere in my Mind Their Is a Painting Box" is part of a series of short stories that I love! So I was more than happy to reread it.

All of the stories were great, but there were a couple that stuck out at me in particular. I really enjoyed "Refinerytown" because it toyed with the idea that our imagination can bring fairy tale creatures into being, but that doesn't mean they will do what we expect once they are "real!" It's an idea that de Lint has used before, but while the last one I read was haunting, this one had me laughing!

"That Was Radio Clash," is a sweet and yet complicated story about a man who gives others the chance to go back and change their big mistakes. What made the story so interesting was the complex weave of alternating realities, and how magic tied them all together. I like the idea of second chances because we all mess up at one point or another in our lives, and magical second chances are even better!

"The Newford Spook Squad," amused me because he borrowed from other writers! In this story the police force in Newford has decided to create a "spook squad" to investigate some of the odder occurrences in their town, and guess who helps them? None other than Hellboy himself! Having seen the Hellboy movies I was entertained by the marriage between his story and the Newford story. This story first appeared in an anthology called "Hellboy: Odder Jobs."