I Am Apache by Tanya Landman 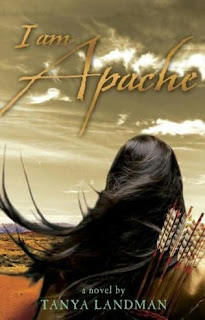 "I am Apache" is the story of a young Apache girl who chooses to walk an unusual path. At only 14 years old she watches her little brother brutally murdered by Mexican raiders. It was the last straw for Siki. She had already been through the loss of both her father and mother, and now she was left alone. Well not entirely alone, she still has her tribe, but she has lost her family and that leaves her raw and angry.

Siki had never really been a normal Apache girl anyway. She wasn't very good at any of the women's chores, to her shame, but she tried. Until, that is, she decides to walk the path of the warrior. It is allowed for girls to walk the path of the warrior, although it is unusual, and she faces resentment from some for her choice. Others choose to help Siki though, and she slowly but surely proves her value as a warrior.

While Siki is busy learning the ways of the warrior, her tribe is in ever increasing danger from both the Mexicans and the White Man. Siki goes along in raids to revenge her people, learns that things aren't always as simple as they seem. She battles on valiantly though, fighting to protect her people, and preserve their honor.

I really enjoyed reading Siki's story. Watching her grow up, watching her learn, and following along with her journey. The choices she made sometimes surprised me, and by the end I found myself unable to put the book down, totally gripped in the story.
Posted by Live, Love, Laugh, Write! at 10:09 AM