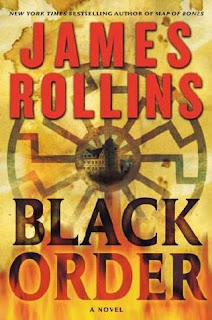 I had a conversation the other day with my Mom about books, sparked by seeing "The Da Vinci Code" in a check out line. One of the things I told her about was the "Sigma Force" novels which I described to her as similar to "The Da Vinci Code" except with out all the controversy surrounding them!

"Black Order" continues the "Sigma Force" series by James Rollins. This time we find ourselves caught up in a sweeping story that has its roots in Nazi Germany, and that extends to mountains of Nepal. There are three main story lines running through the story, and it took me quite awhile to figure out how they all connected. I appreciate that in a story, I like being stumped!

The "Black Order" is the name given to a series of horrendous experiments that the Nazi's had been conducting in an attempt to create the perfect soldier. Only the experiments didn't end when the Nazi's fell. Now the results of these experiments are leading to death and destruction, and it's up to the Sigma Force to unravel this mystery.

On a side note, I read this book as my brother was on his way home from two years in Nepal. Entirely coincidental, but a lot of fun. This story takes place up in the high mountains though, and he really didn't get up there much.
Posted by Live, Love, Laugh, Write! at 2:53 PM