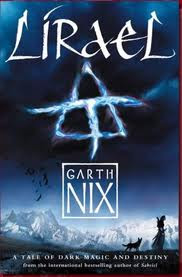 "Lirael" is the sequel to "Sabriel" by Garth Nix. As we start this book Sabriel and Touchstone are married, and have been ruling in the Old Kingdom. Well, Touchstone rules, and Sabriel defends the kingdom from the dead and those who would seek to raise the dead. She is the Abhorsen, the one Necromancer pledged to stand against all others.

This book centers around two characters, Lirael and Sameth. Sameth, better known as Sam, is the younger child of Sabriel and Touchstone, and the one destined to follow in Sabriel's footsteps. In his last year at school over in Ancelestierre, he's at the top of his game, and on top of the world. Until, that is, his team is way laid and attacked near the wall by a bunch of undead. Trying to defend his friends, Sam enters into death to attack the Necromancer responsible for the attack, and finds himself over powered and nearly killed. This scares Sam so badly that he can't even look at the tools of the Abhorsen with out getting ill. Neither can he find the courage to tell his mother.

Lirael is a daughter of the Clayr, although she's never felt much like one, because she doesn't have the "sight" that the Clayr are known for. Each year that passes without her gaining the sight finds her sinking deeper into depression. That is, until one day when she comes to the attention of some of the older Clayr, who realize she needs a purpose to fill her days.

They put Lirael to work in the Library, a job that she finds fascinating and distracting. She still mourns her lack of sight, but it helps that she now has access to all this learning! Lirael has a talent for charter magic, and she quickly is learning things and accessing areas far beyond what she is supposed to. She even makes herself a construct of a friend, well she tries at least, the result (The Disreputable Dog) is a little beyond what she had originally intended.

Once again a great evil is attacking the Old Kingdom. Sabriel and Touchstone have gone to Ancelestierre to try and stop the flood of immigrants that are unwittingly being sent to their deaths (and subsequent enslavement). When Sam hears that his friend is trying to come visit him, in dubious company, he sets out across the land to try and save Nick. Around the same time the Clayr finally have a vision with Lirael in it, and she's sent off to find Nick as well, although they don't know each other. Eventually she will meet up with Sam and it will be up to the two of them to save the kingdom!
Posted by Live, Love, Laugh, Write! at 1:39 PM

I skim read because I'm going to read this book, but I have got the trilogy on my shelf now. *shudders at scary Mogget*