My Life - The Grand Adventure

It's been awhile since I've done a good update on this blog about what's been going on with me. Heck, it's been a long time since I've blogged consistently period! I know that's left a lot of my friends wondering what's going on, so I decided it's time to update! Plus I have some good news to share, so that always makes it easier to give an update :P
The reason I've been awol alot from...everywhere...is that my migraines got really bad again. I've done a LOT of sleeping and a LOT of reading on the couch. It's been really frustrating and I was getting pretty depressed about it. It's overwhelming when you can barely get the day to day stuff done, like cooking and dishes, and there's no hope of doing anything fun, like going out with the girls!
Well I saw my neurologist last week. I didn't really have much hope going into because I'm on so many meds for my migraines already, and we've eliminated a lot of foods as well. The doctor totally shocked me though!
Apparently there's an IV therapy that you can do to stop the migraine cycles. She said my previous neurologist probablty would have done it, but he didn't have access to an IV center (called a infusion clinic) so he couldn't really. You can do the treatments via shots, but it's pretty painful so that's not a good option. 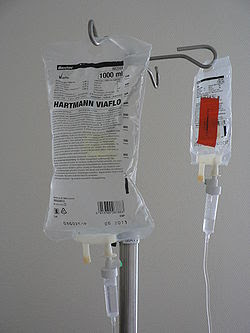 So we started the treatment last week. She said it might take several visits to get this current cycle of migraines stopped, but the good news that any time I have a migraine that lasts for two days or more, I can go in for an IV to stop things before I get stuck in another cycle of helplessness.
I'm really excited about this. The drugs aren't fun, but the possibility of being functional on a regular basis is incredible. I nearly started crying in the doctors office! And that was before they gave me the drugs.
The drugs I'm getting are a cocktail of a migraine med to stop the migraine, a pain med (narcotic) to help with the pain and to keep my blood pressure from spiking, anti-nausea because the other drugs trigger that problem (I got SUPER dizzy and could barely sit up with out my stomach heaving), magnesium, and an anti-seizure med (it works for migraines too). I had to do the shots last week because they didn't have an opening in the infusion clinic. That was fun - not. LOL. Because they gave me two shots of everything but the valium I ended up with four shots in my arm and three in my hips. Fortunately the two treatments I've done since then have been IV's. Much less painful!
Now I called my life a grand adventure right? Well the massive dose of drugs wasn't the end of the story! On Wednesday (so the shot day) I also had an appointment with my natural doc out in Beaverton. I slept in the car on the way over, and then I slept through most of my appointment while she did some massage and pressure point stuff. Then, we're on the way home and I'm half asleep again (do you blame me with both narcotics and valium in my system?), and we get stopped right off the I5 bridge because the bridge is up. We were laughing about yet another thing happening you know? Gordon turned the car off to save gas (we were there for about 15 mins) and I dozed off.
Well the bridge went up and traffic finally started to move, and we went to start the car, and nothing. We're pretty sure the alternator is dead. So there we were, I'm barely coherent, we're in the fast lane, and the car is completely dead.
I hopped out and went to the drivers side. Fortunately Gordon has a small car (a Rav). He got in back to push and I pushed a little from the front. The guy behind us (driving a delivery van) jumped out to help push, which I was praising God for because with my back problems there really wasn't much I could do to help with the pushing.
We got off to the side of the road just fine and Dad came and picked us up. He has a tow bar (he used to have a towing business) so we were able to tow the car right away. Getting me out of the car (in traffic) and into the truck was interesting. I could hardly walk in a straight line! After my Dad and brothers got the car hooked up the boys jumped in the back of the truck (where their butts got soaked) and we took off.
It was a crazy day.
But wait! The fun doesn't stop! I'm going to be getting a colonoscopy and an endoscopy tomorrow. I've been having some intestinal issues (I won't give you the nasty details) and we're trying to determine the cause. So I'm on a liquid diet today. Oh yah - let the good times roll...
Posted by Live, Love, Laugh, Write! at 11:52 AM

Oh Ruthie!! man...that is a lot going on.
Honey, I hate to sound like a broken record but while you're getting those scopes done, please have them look into Celiac Disease. Guess what Celiac can cause---migraines. Along with intestinal illness and a myriad of other symptoms. You know I'm here for you, your own glutenfreegirl :)

*hugs* Ruthie. Not nice at all! I hope you can get into semi-normal headache free-ish routine soon.

I'm with you on the life being 'interesting'.

Sorry you are having so much trouble honey. Want to let you know that Valium is also a narcotic. Sometimes I wonder if you really have a clue what you are taking. You have posted before that you are on tons of medication. Have you seriously considered getting off everything and startind out with a clean system. Sort of like rehab. I worry all the time that a lot of your health issues at this stage are actually caused from just plain too many drugs and pills? Just a suggestion. It's just common sense that with drug side affects and drug intereactions with each other can often cause more issues then they clear up. Also, your friend Amy has a point. Celiac will be one of the things they look for on your procedure yesterday. Let me know what the endo/colonoscopy shows. However, Celiac is hereditary. Unless it comes from you Mom's side, it is not on your Dad's side of the family. I love you. Feel better :)