The Emerald City of Oz by L. Frank Baum 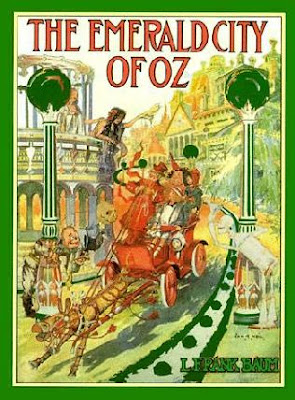 "The Emerald City of Oz" continues the Oz story, and is actually one of the books I remember reading before! I know one point (middle school age?) I decided to read the Oz books, but I didn't go about it systematically reading them in order like I am right now. I just pulled them off the shelf and read whatever I found. So, now, as I'm rereading the series from start to finish I'm finding some books that are brand new to me, and some that are revisits, from a new perspective.

Do you remember the Nome King? We first met him in "Ozma of Oz" when Dorothy found herself in the land of Ev, and ended up saving many lives and taking the Nome King's magic belt. Ozma now owns the Magic Belt, and both her and Dorothy have almost completely forgotten about the Nome King, but he has not forgotten them. The Magic Belt was the base of his power, and in his great anger, he wants it back.

Now Guph, one of the Nome Kings oldest Nomes, heads out on the behalf of the King to form alliances with some of their terrible neighbors in hopes of over taking Oz. The people he visits are terrible and strange, and each group separately agrees to help the Nomes, while secretly planning on betraying them in the end. Their evil, what else would you expect?

Meanwhile Dorothy, Aunt Em, and Uncle Henry are all traveling to Oz! Aunt Em and Uncle Henry were about to lose the farm, and instead of allowing them all to descend into abject poverty, Dorothy decides to appeal to her dear friend Ozma to allow them to move to Oz. Ozma is delighted to agree, and before they know what's happening, Aunt Em and Uncle Henry find themselves in the castle in Oz. It's quite the adjustment for these poor farmers, but they slowly begin to acclimate.

Ozma sends her friends off to explore Oz, and we get to meet many more strange creatures while they tour Oz. It seems the land of Oz is ever full of surprising new creatures and lands! As they explore the Nome King is drawing ever closer in his attack on Oz, but don't worry, Dorothy and her friends turn out to have a few tricks up their sleeves.
Posted by Live, Love, Laugh, Write! at 2:20 PM

I have no idea how I've never read any of these books. I should probably do that, huh?