How to Train Your Dragon - Movie Review 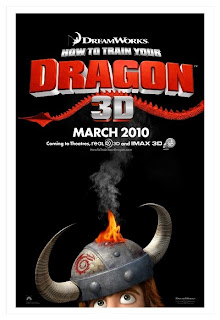 Last night my brother and I went out and watched the movie "How to Train your Dragon" by Dream Works Animation. While the movie is available in 3D - we saw it in 2D - since it was cheaper and both of us are kinda worried the 3D would mess with some of our eye problems! 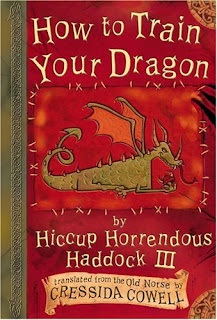 Before I talk about the movie, should tell you that it's based (like so many are) off of a book! I didn't realize this until we went to see it last night, so the first thing I did today when I sat down to write this review was to look up the book and the author.
Cressida Cowell is the author of the books about Hiccup the Viking, the first of which is called "The Seasick Viking." It's a picture book, the first book she wrote about Hiccup, and the one that inspired the "Hiccup Horrendous Haddock III" series (of which "How to Train Your
Dragon is the first book.) I have "The Seasick Viking" on order from the local library, so look for the review coming soon! 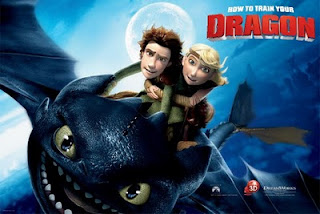 "How to Train Your Dragon," the movie, is about a boy named Hiccup who just doesn't fit in. He lives in a colony of Vikings that seems rather normal at first glance, until you see the pests, ie, dragons! They have been there for 7 generations, but every house you see is new, because they are constantly battling to put out the fires the dragons are starting.
In a place like this the strong thrive, but Hiccup isn't really that strong, and he tends to mess things up. So when the dragons raid he gets pushed aside and told to stay out of the way. At the beginning of the movie we see a vivid example of just why this is.
Hiccup's Father, Stoic, doesn't know how to deal with the boy. But another viking convinces Stoic to let the boy start training to kill dragons with the other kids his age. At first Hiccup is miserable, and then he slowly begins to show a kill with dragons that shocks everyone else. How IS he doing it?
The answer is that one day Hiccup had wounded a dragon, and then instead of finishing it off, he made friends. This unique friendship will change his life forever. He learns many things that will shake the foundations of everything he knows about dragons, he finally gets noticed by the girl, and he makes his father proud. It's a cute movie full of dragon battle scenes and humor.
One thing I really enjoyed about the movie was listening to the voice of Stoick, Hiccup's father. The part of Stoick was read by Gerard Butler, a Scottish actor who's voice makes me melt! Any time I get to hear his beautiful voice is fun!
All in all, it's a great movie. There are so many more things I could say about it, but I want to let you discover it for yourself, and not give too much away!
Posted by Live, Love, Laugh, Write! at 6:36 PM

I really really want to see this movie! Thanks for mentioning the 3D thing- I don't think I could handle that right now, either. And I had no idea it was based on a book- cool!

It sounded interesting, so it's good to know you liked it.
I have to say, though, I'm a fan of 3D.

I'll have to go check it out! Thanks for the review!