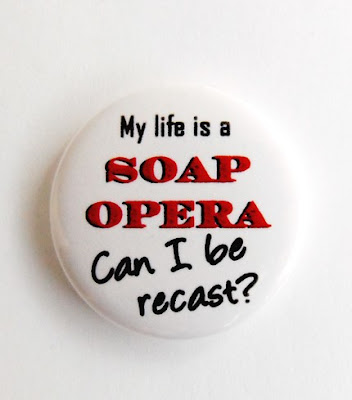 I found this button when I went to research this month's featured Etsy Blogger so I could write about her in my other blog. I instantly fell in love because it feels so true sometimes! Or not a soap opera then maybe a comic tragedy? Because it can certainly feel super-tragic at times, but I always try to keep laughing!

The latest update is that I'm apparently really anemic. We found this out because I finally got to go see a neurologist about my migraines earlier this week. He ordered a comprehensive blood work up which, among other things, meant we found out I'm anemic.

I was kinda floored when I first got the letter with the news. I mean seriously, come on, something ELSE is wrong with me? Now that I've had some time to think about it I'm much calmer. Yeah, I'm anemic, but the good news is that this treatable and it explains a lot. Apparently when your iron gets this low it can cause all sorts of neurological problems - which means we may have found the cause for why my migraines have gotten so bad these last few months!

It also explains why I'm always so incredibly tired. I figured I had good reason considering the sleep apnea, asthma, and migraines, but apparently I had even more reason than I thought! Speaking of the sleep apnea - the latest update on dealing with the Darth Vadar mask is that I haven't been. I can't wear it when I have a migraine because the pressure it puts on my face increases the pain of the migraine. *sigh* Hopefully I'll be able to start using it again soon, I was starting to adjust to it, and apparently I need all the rest I can get!

The other thing the neurologist did was he added several new vitamins and an herb to my daily pill regiment. I was NOT happy about even more pills, but I want the pain to go away, so I've been sucking it up. I've been adding them in a day at a time so that if I reacted to one I'd know which one it was. My body does tend to react to weird things after all.

Yesterday I added in Feverfew. Apparently it's an herb often proscribed as a natural treatment for migraines. I was pretty skeptical at first because it smells awful, even though it's in pill form! Good news is I only had a very low level migraine this morning, and nothing all afternoon! I don't know for sure if it's the Feverfew or if I just had one of my "lucky days," but I'm hoping its the nasty smelling herb because I would really love to have found something to ease the pain!
Posted by Live, Love, Laugh, Write! at 8:00 AM

I know that nasty little herb! There have been a few I have tried - usually in tea form - and they do work - not to rid the migraines, but lessen them.
best of luck to you!

Ruthie...I hope them finding your anemia is a start to better things. Maybe those docs will start fixing you up now :) Figuring out the problem is the first step!

I would have thought the doctors would have looked to see if you were anemic before!! That does explain a lot of things! Hope new vitamins will help ... just new vitamins?? Jeez...

i love your header too.:)