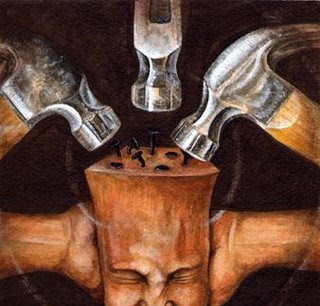 Some days I can sit up and get things done, but I've spent way too many days in the last few weeks curled up on the futon not able to do anything.

It's been pretty frustrating.

I'd almost rather have my asthma attacks than this! I mean, I can actually get a lot done when I'm not breathing. I can talk on-line, I can make jewelry, I can write. As long as I move really slowly I can get things done. When I'm trapped on my back in pain - I can't.

I've been working on dealing with the doctors trying to figure this all out. They thought it was one thing, and then another. Finally they sent me to the neurologist this morning.

Well, the good news is that there likely isn't anything wrong with me that's going to kill me! Yay! Ok, so yeah, I pretty much already figured that. I've had migraines for years and years, they've just gotten much, much worse.

The bad news is that he said it's going to take awhile to work through all of this. Part of it is that I'm already on a bunch of meds because of my severe asthma problems. Part of it is that I'm on welfare insurance and they don't pay for a lot of different medications. So we're starting out by having me take a bunch more supplements in case its being triggered by a vitamin deficiency. We're also going to try increasing the heart medication that I'm already on because it can be used to treat migraines.

Other than that...well...i'm supposed to keep a headache diary and go back and see him in a month. He wants to give the vitamins a chance to work before he trys the next medication, which is apparently a major seisure medication.

So - I'm slogging through the best I can. But if I sometimes disappear for a day or two, that's why. Sorry.
Posted by Live, Love, Laugh, Write! at 5:56 PM

This sucks seriously. I get them every so often, and docs frequently have NO answers or even help :( Hope you feel better.

I'm glad you were able to see the neurologist finally and hopefully the vitamins work to end your migraines or at least decrease their frequency. I hope you get to feeling better very soon!

I hope that you get some relief soon.

Hang in there! Glad to see you are at least able to keep in contact and write a blog just to let us know how you are progressing. My prayers are with you that all that pain will soon just disappear, and you can get back on track!

Maybe you can do what I did...have a kid :P kidding...but they did stop. Had them from age 5 to 24. Became 2-5/month in my teens, then weekly ...had my son & wham - only 3-4 per year. Musta blown a blood vessel.
Hopefully you can get rid of yours without such extreme measures :)

Oh Ruthie! I hope you get better soon! This just sounds aweful! Those dang doctors better get you fixed up...we're missing you in the EB Forums when you're ill!
(((((HUGS)))))

Thanks guys - and TiLT - I totally don't plan on having a kid anytime soon :P

I am so sorry that you are feeling bad and I hope you feel better soon! I am sure you have checked on the side affects of your current meds as that can be it too. I have migraines myself so I feel your pain!

When I was married to my ex-penis, I got them. Got rid of him and they went away.

As you are so happily married, thats not an option either.

Hummm, I pray for you and your handlers, ummm doctors, that they stop looking at the $$$ an offer you humanity!

So many meds sweets...I worry for you.

Lots of love and prayers and hugs, and homemade chicken soup wishes

I HAVE missed you Ruthie...but understand. Hope you get some relief soon and know that you are in my prayers....take care and try to think good thoughts.
Blessings~
Cindy

I feel for what you go through. I also get migraines badly. I had my eyes checked and got reading glasses for the computer, they dissipated some. Now I was recently diagnosed with Hypothyroidism which is another thing that will contribute to migraines. I have been taking meds for that for almost 2 weeks and guess what, no migraines so far... Of course that is only one persons solution but I really hope you get some relief from your pain. Your too much of a cool chick to be curled up in pain all the time.

I am so sorry to hear about your migraines. They are the pits. I'll be sending good thoughts your way.