Happy Valentines Day my friends! I thought long and hard about whether or not I should write a Valentines Day post. I know there are a million and a half different posts on the subject today, so I was a little leery about it at first, and then I realized that I do have a story to share. So I've decided to share my story, my roller coaster ride, what Valentines Day means to me.

Growing up I was always a tom-boy. I spent my childhood covered in dirt, up in trees, and skipping stones. Because of this I was much more comfortable dealing with boys on the basketball court than I was considering them as potential dates. And, since they were used to
seeing me on the basketball court, the boys thought of me more as "one of them" then they did as a girl. I can't tell you how many times guys would say something along the lines of, "Your sort of a girl, I like this girl, what do you think I should do?"

Slowly but surely the girls I was friends with started asking me for advice with the boys. They figured I was in the boys heads, and so they'd ask me a million and a half questions!
I became a sort of mediator in my friends relationships. I'd translate what the boys were thinking for the girls, and I'd tell the boys when they were being stupid. Plus, since in Middle School I was bigger than most of the boys, I on occasion would scare them a bit if they upset
my girl friends.

By High School the pattern was firmly set. I was "one of the boys" to the guys, and a source of information to the girls. The only problem with this is that I no longer wanted that to be who I was. For years I'd denied having crushes on any of the boys, now I didn't know how to admit that I liked a guy, and despite all the advice I'd given others, I had no idea how to act like I wanted to be in a relationship. I knew how to act tough, but not how to be vulnerable, which actually takes more strength.

Eventually I found myself in a half-relationship. It would take a long time to really explain. The short version is that we thought we were in love, and maybe we were, but we never officially dated. The reasons were many. It was a strange relationship that last for too many years.

When I was younger I didn't think much about Valentines Day. It was just another day to me. Eventually I grew to resent it. Especially while I was in my almost relationship. I had this guy who thought I was special, but it wasn't like I had a date or received anything special from him on Valentines Day.

Then, one day, our relationship was over, and I was completely alone for Valentines Day. I didn't even have his theoretical love to comfort myself with any more. He was the only boy who'd ever cared for me like that. Now that he was gone, and I knew that was the right thing, I wondered if I was lovable.

Several years went by and each Valentines Day was painful for me. It was a vivid reminder that I was alone. Some years I tried to put a brave face, other years I didn't bother.

There was one year during that time that's memory I cherish. A year that stands out among the rest as a high point. A year that actually wasn't that painful in the end.

I'm a swing dancer, or at least I was then. Some of us who were single decided to brave the Valentines Dance that year. We went as a group so we could try and forget that we didn't have our special someones. It was still hard. We all had on our brave faces, but it still hurt to see how many loving couples surrounded us.

Towards the end of the evening my brave mask was starting to slip, and one of the guys who was with us noticed. He was a close friend, we never considered dating, but we always had a special bond. So when he saw that my pain and uncertainty was rising to the surface he waited for a slow song, one that would be torture for me to sit out, and came over and asked me dance with the cutest grin on his face.

For that one song he held me close, treated me like a princess, and for once I felt like I was loveable. It was magic. Nothing had changed in our friendship, but it was still the best Valentines present I had ever received. For those few minutes I knew that someone cherished me. Even if it was only as a good friend.

Amazingly enough that one year kept me going for the next several. I had that memory to cling to. I knew that no matter how I felt sometimes, at least one guy thought I was special, even if it wasn't special the way I wanted to be considered. The next few Valentines Days weren't quite as low as they had been.

Now, I actually like Valentines Day. Talk about a turn around! Of course, this year is my second Valentines Day as a wife, and I treasure my dear husband. He's not some super-romantic guy who's going to shower me with presents, but that's ok. I know that he loves me, and that's all that I need. 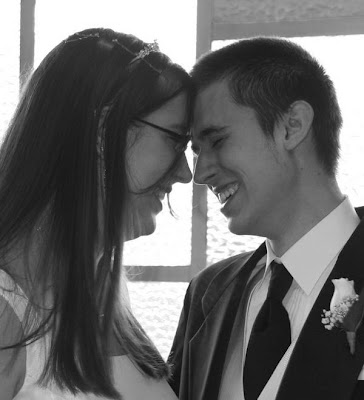 Awww.....you 2 look so sweet. We don't bother we gifts & such today...knowing how we feel about each other is more than we need.

So, you were the tom-boy friend to the boys too huh? Just one more thing :)

Glad that today is finally a good day for you (((hugs)))

I'm glad you are able to experience the true meaning of Valentines Day with your wonderful husband now. Happy Valentine's Day to you both!

I too was a tomboy and understand the in-between stage of boys as friends! Yuk...to be a teenager again...eek!!!

Oh (((Rosey Posey))), you are beautiful and I LOVE the photo of you and your hubs...

I'd like to remind you through that there is no such thing as "only a friend"!