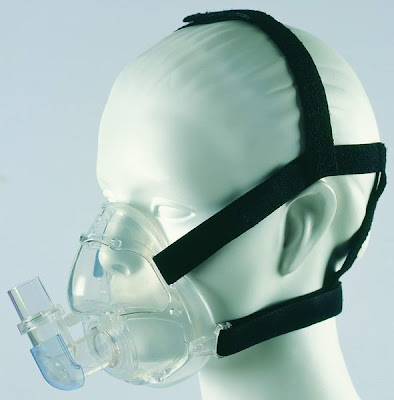 Remember how I told you about my first sleep study? Well, the results were that I do have moderate sleep apnea, and apparently that means I'm not really getting that much rest at night! So we scheduled a second sleep study for last night, and they tried a "darth vader mask" on me.

Ok, so that's not really what it's called. It's called a CPAP Machine, which is short for continuous positive airway pressure. Basically, when a person experiences sleep apnea (stopping breathing in their sleep) it's because their body relaxes so much while their asleep that their airway starts to collapse. The CPAP machine provides positive air flow that apparently acts like a splint in your throat, so you don't stop breathing!

Well, getting a good nights sleep sounds great, but it's going to be HARD to do with that mask on! Fortunately it's not really as loud as Darth Vaders breathing, but that's what it reminds me of anyway. It was pretty uncomfortable - and I woke up with a really dry throat and a face. The nurse said they could adjust the humidty levels in the air flow and that would help, so I'm trying to think positively.

I'll be hearing back from the sleep doctors office again soon and I'll go into to get my own machine to take home and try to get used to - I'll keep you updated!
Posted by Live, Love, Laugh, Write! at 4:45 PM

Yikes, that's quite a contraption! But when the choices are between that mask and not breathing, I'd choose the mask. :)

My father has to wear one of those every night because of the same problem. My mother said she was so glad when he started wearing one because now she can get a good night's rest.

Well now that's not too romantic for a still newlywed! But, getting rest is the most important thing so hopefully it works for you!

Glad they were able to figure out what was going on! I pray you get a good nights rest my dear!

Though I agree with BT's comment about romantic...newelyweds do not have to worry about anything getting in the way of that, do they?

When working in airport security I knew of several people who used the CPAP and hundreds a day came through security. EVERYONE said they had to get used to it but would not trade it for anything now!

A great nights sleep on a regular basis will change your life forever.

Wish my DH would get one...he needs it terribly.