The Poe Shadow by Matthew Pearl 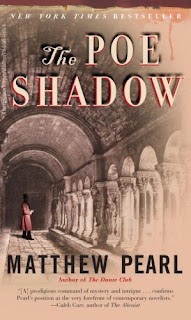 "The Poe Shadow" is a story that starts with the strange facts concerning Edward Allan Poe's death, and creates a plausible fiction to explain what happened. I had heard some really good reviews on this book, and since I like a good mystery, I was excited to read it! Unfortunately, while it was an interesting read, I didn't think it was as good as the reviews had said. In many ways the style is similar to an older mystery novel, but it didn't capture my interest in the way that an Ellery Queen or Sherlock Holmes would.

In this story we meet Quentin Clark, a young lawyer with his life in front of him. He has a good secure job working in a firm with a close friend of his. He has a woman who is his best friend and will probably some day will be his wife. He even has an inheritance from his father that allows him to live in comfort above and beyond what his work might allow.

Clark puts all of this at great jeopardy though when he becomes caught up in the strange circumstances surrounding Poe's death. He had been acquainted with Poe, and the two of them had exchanged several letters. Clark was planning on helping him defend his new venture from libel, so when Poe dies, he simply decides that now it's his job to protect the poet from the mud that's being thrown at his dead body by the press.

In attempting to unravel the strange circumstances around Poe's death Clark decides to track down the man he believes was the inspiration for one of Poe's characters, a man named Dupin. Dupin, in Poe's stories, was a man who helped the police solve mysteries strange and peculiar with a brilliance that stunned all around him. Unfortunately for Clark there seem to be two men that fit the description. He believes that one is the correct man, but the other decides to set himself up as the "real Dupin" and it becomes a contest of wills to see who will uncover the truth first.

Clark throws away many things in his life with seeming little care as he pursues the mystery around Poe's death. While he does eventually seem to realize what he's done, it still frustrated me. I also didn't really like the character that he thought was the real Dupin, a man named Dupont. He was aloof, in a manner reminiscent of Sherlock Holmes, but whereas Holmes eventually lets you as to what he's thinking, for the vast majority of this book Dupont simply ridicules Clark for the things he's missing. That left me frustrated as I could never really figure out what Dupont was thinking. If he had let us in on his thoughts before the very end of the book I wouldn't have been as frustrated.
Posted by Live, Love, Laugh, Write! at 3:48 PM