The Patchwork Girl of Oz by L. Frank Baum 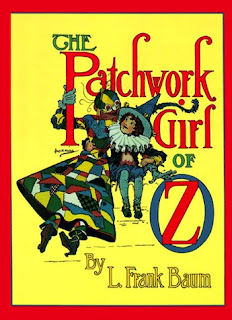 In the last Oz book, "The Emerald City of Oz," Ozma was forced to cut the magical land of Oz off from the rest of the world. This, unfortunately, meant that the official historian of Oz could no longer get any stories about Oz! This made many children very sad, until one clever little child thought to ask why Dorothy couldn't send our favorite historian information via wireless telegraph? Well it was a brilliant idea, and with a little help from Ozma, it was soon worked out so that the children could continue to learn about the wonderful land of Oz!

"The Patchwork Girl of Oz" starts out with us meeting a boy named Ojo the Unlucky, and his Unc Nunkie. Ojo is unlucky because he's lost his parents, and he lives in a lonely part of the forest with only his Unc Nunkie, who hardly ever talks at all. One day their supply of food runs out, and they are forced to go off in search of new food.

Their search leads them to the house of the Crooked Magician, a man who is truly crooked in body, and maybe just a wee bit mentally as well. It was the Crooked Magician who made the Powder of Life that animated Jack Pumpkinhead and the Saw Horse. Making the Powder of Life was an extremely long process, 6 years long to be exact, and he was just now about to finish a second  batch. This time he was making it for the purpose of allowing his wife to animate a servant to help her around the house.

The magician's wife had sewn herself a servant out of a patchwork quilt that she had around the house. The girl was built quite well, with a riot of color that was rather unseemly for a Munchkin household, but that was good, because it would help her remember her place. She also added some brains from the jars her husband kept on the shelf, but only  enough for the Patchwork Girl to do as she wished. What she didn't know was that Ojo decided the Patchwork Girl deserved better brains than that and added quite a bit to the mix!

When the Patchwork Girl was brought to life a terrible accident happened knocking the Liquid of Petrification off the shelf and turning the magician's wife and Unc Nunkie into statues! Everyone was horrified by this, especially because the Powder of Life was spilled at the same time, so there was none left to save the new statues with! The only solutions were to wait the 6 years needed to make more, or to gather the mysterious ingredients needed for the spell to undo them. Not wanting to wait that long, Ojo sets off to find the ingredients, and the Patchwork Girl accompanies him. They have a wild adventure meeting lots of new residents of Oz!
Posted by Live, Love, Laugh, Write! at 1:05 PM