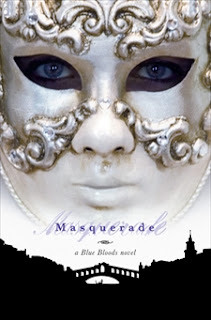 "Masquerade" is the second "Blue Bloods" novel by Melissa de la Cruz. My husband happened to come over to talk with me while I was curled up on the couch reading this one, and he commented on the creepy eyes behind the mask that are on the cover. So I told him a little bit about the story line. His comment, "sounds like a soap opera to me!" You know, I think my husbands right, it is a bit of a soap opera, but that's what makes it so much fun! A vampire soap opera set in the posh world of upper-class New York. All the drama you could wish for and plenty of fun too.

In "Masquerade" Schuyler is attempting to hunt down her long lost grandfather in the hopes that he will be able to help her with the mystery of the Silver Bloods. The Silver Bloods are vampires who feed off of other Vampires (the Blue Bloods), and this is the most heinous crime a vampire can commit. The council claims that all the Silver Bloods are gone, but after the recent events Schuyler believes differently.

Schuyler and Oscar (her human best friend) have traveled to Vienna to track down her Grandfather, and the "chase" takes a lot of twists and turns! She does eventually locate him, but he claims there is nothing he can do to help! Schuyler is crushed, but there's nothing else she can do but return home.

Back at home in New York Mimi Force (Schuyler's enemy and coincidentally her cousin) has been up to some of her usual tricks. She's decided to throw and after party for teen vampires only that will be held immediately after the annual Four Hundred Ball. To make things as full of social intrigue as possible, the party will be announced by text message the night of the party, and it will be a Masquerade party so that it's hard to tell who is there and who didn't get invited!

Unfortunately for Mimi, plans don't always work her way, and by the end of the ball she's angrier with Schuyler than she's ever been before. She is determined to take Schuyler out of the picture, and with the help of the new and mysterious Kingsley she just might succeed...
Posted by Live, Love, Laugh, Write! at 12:03 PM

Oooh - I have still yet to read the first book in this series :)