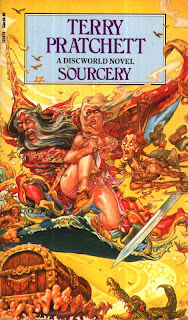 If you've read any of Pratchett's early books than your probably familiar with Rincewind. Rincewind is a wizard, a nice fellow, but totally hopeless at his chosen profession! Somehow he always manages to survive the craziness he encounters though, and says that he's very addicted to living, which is probably a good thing for him all things considered.

In "Sourcery" we encounter a very rare phenomenon in Discworld, a sourcerer. Sourcerers are rarely born in Discworld because for generations wizards have been taught that interacting with women will decrease their magical abilities. This isn't strictly true, although being distracted isn't necesarily a good thing when practicing magic, no this is merely a lie that was spread to keep wizards from having children. Why is this? Well, 8 is a magical number on discworld. The eight son of an eight son always ends up a wizard (although its not the only way to become one). Worse, the eight son of a wizard is a source of magic in and of himself, a sourcerer.

Now if your familiar with the wizards of Discworld you know that they tend to be relatively harmless. So how much trouble could a sourcerer be? The answer is LOTS of trouble! Sourcerers are not bound by the normal constraints that wizards usually face, and they infect everyone and everything around them with magic. Soon you have an almost all powerful sourcerer being supported by power mad wizards, and the world is being turned upside down.

Rincewind finds himself caught up in the middle of all this mess with a strange maiden named Conina. Does her name sound familiar? It should, she's the daughter of the famous Cohen the Barbarian. Conina always wanted to be a hairdresser, but her genetics mean that she can't stand to sit by when there's a fight, or danger, or anyone who needs rescuing. Which is a good thing for Rincewind since he is generally useless in any situation that calls for brawn (or, often, brains either). Will this unlikely duo be able to save Discworld from the horror being unleashed upon it? Will Conina's brawn and Rincewinds bumbling luck be enough? You'll have to read the book to find out!
Posted by Live, Love, Laugh, Write! at 9:13 AM