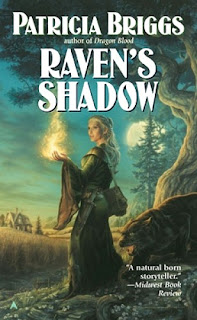 I first "met" the author Patricia Briggs through her Mercy Thompson series, a modern fantasy full of skin walkers, vampires, and werewolves. I instantly fell in love with her writing and her stories and I've been steadily working my way through her entire bibliography. Whereas the Mercy Thompson books take place in the modern world, "Raven's Shadow" is more of a traditional fantasy.

Seraph is a Raven mage, and a Traveler. The Travelers are similar to what we would think of as gypsies in many ways, but they have a legacy of magic that's been passed down from the days of the great wizards. These wizards gave them "orders," different magical talents, in an attempt to protect the world from great evil. Each order has different abilities and each is associated with a different bird.

Seraph, as a Raven mage, is sworn to protect those around her from evil, but when her entire family is killed she sets aside the Traveler ways for a time. Instead she settles down in marriage with a man named Tier, and unusual man who should not be capable of having the Travelers magic, but does anyway. They have a happy, if harsh, life. Content to work their farm and raise their three children. Content, that is, until Tier turns up missing or dead.

With Tier gone Seraph is forced to re-embrace her heritage as a Traveler, and to reveal to her children the extent that they have inherited the powers of her mother's people. Leaving her youngest behind, Serpah sets off with her two boys to try and find out what has happened with Tier, and to face the much darker forces that are stirring in the world.
Posted by Live, Love, Laugh, Write! at 1:21 PM