The Proposal - a Movie Review 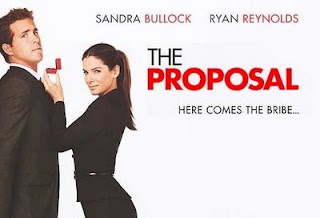 I had a chance to watch "The Proposal" with Sandra Bullock and Ryan Reynolds the other day. I've always loved Sandra Bullock movies, and I'm a sucker for chick flicks! My poor hubby. He always ends up rolling his eyes and me. I tend to watch them on my computer while I work so I'm not torturing him too badly.

I have a vague memory of seeing this movie advertised and at the time thinking it was really interesting looking. It had slipped into the back of my mind though because I don't have the money to go out and see movies very often, and so I tend to forget what movies I want to watch later until they pop up in front of my face and I'm reminded.

The premise behind this movie is that Margaret Tate (Sandra Bullock's character) is Canadian, a bitchy book editor, and about to be deported. I didn't remember the Canadian connection and when I read the little snippet that said she was going to be deported my first thought was, "how on earth are they going to pull off Sandra being from a different country?" I may like her as an actress, but she's not one I can see succesfully pulling off a foreign accent. Then they said she was Canadian and it all made sense. Many Canadians
don't have much of what we'd consider an accent anyway, and it's not hard to believe that she'd cleaned up what little accent she may have had.

Margaret Tate is a bully of a boss. Everyone is terrified of her. They even send IM's around the office warning things like, "The Witch is on her broom" to warn everyone that she's walking around and they better watch out! Andrew Paxton, her executive assistant, gets the worst of it though. Andrew is a determined character. He's willing to do whatever it takes to get what he wants, even working for a monster of a woman, and letting her humiliate him. He works hard to please her though. He even started drinking the same type of coffee as she does just in case he ever spilled hers on the way to the office from the morning Starbucks run! 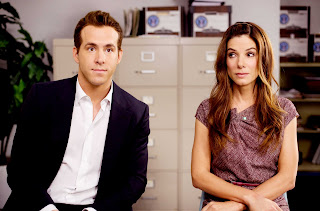 When Margaret discovers she's about to be deported because she never took the time to get her paperwork in order she has a brilliant idea - she'll just marry Andrew! Andrew ends up reluctantly agreeing, but they both panic when they realize all that they are going to have to go through to convince the government that they are truly "in love" and not simply defrauding the government.

Things get really interesting when they fly out to meet his family. The tables get turned and Andrew has the upper hand (mostly) for once. Margaret learns a lot about her assumptions, and about herself. The interactions with the family are hysterical too!

The one disclaimer I will give to this movie is that while most of it is fantastic, there is a scene with a lot of
nudity in it. It's not meant to be something steamy, it's a comedy bit, but you should be prepared for it.

I remember seeing this advertised and going "Gee, that looks dumb". I'm not one for chick flicks, lol! Your review makes it sound not nearly as bad as I thought, though.

Ha ha - I saw this either coming from or going to Ireland. I can't remember which. But I remember thinking the guy was quite hot and I like Sandra Bullock - but the sound was really crappy (planes are loud) so I might have to check this one out. :D