A Great and Terrible Beauty by Libba Bray 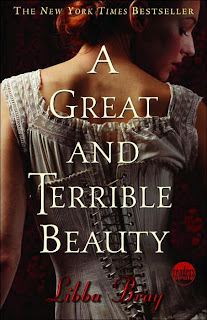 I'm not sure how I first stumbled upon "A Great and Terrible Beauty" by Libba Bray, but I'm glad I did! It's a different approach to the realm of magic and the fantastic than I often read, but it was a very interesting approach. I look forward to exploring what else this author has written.
In "A Great and Terrible Beauty" we meet Gemma Doyle. She isn't like the rest of the girls at Spence Academy. For one, she's spent most of her life in India, and this is her first time in the "mother country." So for her, many of the things the other girls take for granted are new and strange. On top of that, Gemma has just endured witnessing her mother's murder, which for societal reasons she's supposed to say is death by cholera.
As Gemma slowly begins to make a place for herself at Spence, she also begins to attract supernatural forces. She is lead to a mysterious diary, one that tells of girls not unlike her and her friends, who once wielded great power. There is also a mysterious young man who warns her not to use her new found powers lest all be ruined.
Gemma is young though, and power is attractive, how can she not resist playing with what she has discovered? Especially when she discovers that it allows her to communicate with her dead mother? Her mysterious young man is right though, and danger soon haunts Gemma and her friends. Will they manage to overcome? You'll have to read the book to find out!
Posted by Live, Love, Laugh, Write! at 4:43 PM