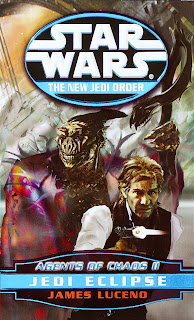 "Jedi Eclipse" continues not only the saga of "The New Jedi Order," it also is the sequel to "Hero's Trial." In "Hero's Trial" a large portion of the drama was centered on Han Solo who is grieving his best friend Chewbacca. He finally started to move forward from his drunken stupor, but his gallivanting around the galaxy doesn't exactly put Leia's heart at rest.

In "Jedi Eclipse" Han is still in the middle of galactic drama as he helps his new friend Droma search for his clansmen. This puts the two of them right in the middle of the battles with the Yuuzhan Vong, something Leia doesn't discover until later, but of course Han's legendary luck kicks in time and again. They will be lead on a merry chase before they find Droma's clansmen though.

Leia meanwhile is visiting Hapes in an attempt to gain their support in the war with the Yuuzhan Vong. It's a difficult time for her emotionally as she's missing Han and worried about him, and visiting her former suitor does NOT help her emotions calm any. Especially when she starts having visions of disaster.

The Yuuzhan Vong are manipulating a new alliance with the Hutts, using them to provide the New Republic with carefully planned intelligence. The Hutts don't realize they are being manipulated though, and they genuinely (for once) are trying to help. Of course this leaves the New Republic trying to decipher the Hutts motives versus the Yuuzhan Vong's motives, and it's a sticky political morass!

And we can't forget about the young Solo's in all of this! Jaina doesn't really make an appearance in this book, but Jacen and Anikan are sent to Centerpoint Station where their basic differences in beliefs on how the force should be used are brought to the fore. This bit of the book also really interested me because it alludes to a story arch that I haven't read, and that sounds really interesting! Ah well, one story arch at a time!
Posted by Live, Love, Laugh, Write! at 5:24 PM