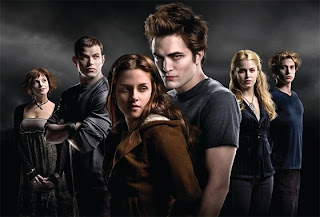 I personally really enjoyed the movie. I thought that they did a good job over all, and I really appreciated that some of the signiture lines from the book were used in the movie. However, at the same time, I was slightly disappointed, and not in the ways that I expected I might be. After all, I tend to be the type that prefers a book to a movie, and usually when one gets translated to the other they end up leaving out important bits that leave a fan of the book feeling dissatisfied. So when I go in to watch a movie that's made from a book I'm usually bracing myself to see what they "messed up" this time! Fortunately that wasn't much of a problem this time. There were things they left out obviously, you can't fit the same amount of detail into a movie as you can into a book, but I think they did a good job of still being true to the story and that they made good choices as to what to keep and what could be left out.
No, what actually disappointed me was the acting. I don't think that Robert Pattinson did a very good job of portraying Edward Cullen, and yes, I'm aware that my opinion may well get me shot by the adoring fans of Edward! Granted, it was a hard roll to have to play. The emotional conflicts that Edward dealt with in the course of the story would have been a challenge for any actor to portray well. Particularly at the beginning of the movie when he's having to fight between his lust for Bella's blood and his desire for her friendship. Having said all that, I think there were moments where Robert Pattinson did manage to play his part well, and I'm hoping that in the next movie he'll do a better job.
While I was watching the movie I wasn't too disappointed with Kristen Stewerts acting, and I think she did a better job than Pattinson, but in thinking about it afterwards I realized there were times she disappointed me as well. She did a much better job at portraying her emotions, but there were times where she over acted. Plus, I really didn't feel the chemistry between Bella and Edward. Yes, there was some hot kissing, but over all, the actors didn't have the chemistry that I would have hoped for.
I know, I'm being a downer, and I started out by saying I enjoyed the movie! It's true, I did enjoy the movie. I'll probably buy it after it comes out. I really enjoy the story after all! Of course my fascination with vampires and all things science fiction and fantasy related may have something to do with that.
On an amusing note, the story is set in Forks, Washington. Now I'm a native Washingtonian, and while I'm not positive I've ever been to Forks, I do know the area fairly well because my Grandparents lived just outside of Port Angeles (also portrayed in the movie) while I was growing up. It cracked me up to see them using the Port Angeles beach as the La Push beach, and as a North Westerner, I was also really amused to see the Columbia Gorge, Multnomah Falls, and Beacon Rock all make appearances in this movie! For those of you who aren't familiar with the area, those are all in the south of Washington or in Oregon.
Bottom line: Worth the money to see in theater and buy when it's released. A fun movie even though it wasn't perfect!
Posted by Live, Love, Laugh, Write! at 12:11 PM

It's nice to hear an honest review of the movie...seems like everyone else just gushes - mostly b/c of him - I guess he's the new hottie. I'll have to admit, I don't see it...guess I finally hit that age where there is a minimum age for hottness - he's just too young :( But if I were in my teens - he'd probably be posted on my wall.

Looking forward to seeing it tho'...after I read it. Haven't read it yet b/c it was pushed as teen novel. silly me! I should know better...it's still vampires after all!

sorry for posting so long :)