First let me say - sorry for the lack of reviews lately!
I hope to be bringing these to you on a regular basis again now :) 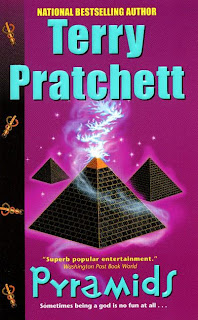 I've read the majority of Terry Pratchetts books, and as I do my read through by publication date, I'm enjoying coming across the ones that I've never read! "Pyramids" is one of those, and as my local library didn't have it, I had to do an Interlibrary Loan request for it!

"Pyramids" is the story of Teppic, a young man on the verge both of becoming an Assassin and a King. Both are rather respectable occupations, and in fact Teppic had been sent to Ankh-Morpork to train as Assassin precisely because it was a noble calling and one that promised to give him the best education.

In Ankh-Morpork crime is managed by the guilds for the most part. They've taken what used to be rather haphazard acts of thievery and murder, and elevated them to an art. This actually allows for a more orderly society than they had before, and I find the system rather fascinating. I rather enjoyed the first portion of the book where we learn about Teppic's early days at the school, and his eventual Assassins test.

Teppic does not get to stay merely an assassin though, the blood of Kings runs through his veins, and when his father dies, it's time for him to go home and rule the kingdom.

Djelibeybi is a small desert country. It's narrow and long, and its biggest distinctions are the pyramids that dot the landscape (and bankrupt the kingdom) and that its presence keeps its two neighbors from warring with each other. Teppic finds himself being manipulated by the high priest into creating the biggest pyramid ever in honor of his dead father. Although, if he could hear his dead father like we can, he'd realize that the last thing he wanted was a pyramid.

The only problem with this pyramid is that it's simply dangerous to build a pyramid that big. Oh not for the reasons you might expect, massive pieces of rock and dying slaves and all that, but because the pyramids actually channel time. So when this mighty pyramid is built, and not finished correctly, everything in the kingdom goes haywire. The kingdom itself disappears, the mummy's walk, and Teppic the Assassin King has to figure out how to fix it all.
Posted by Live, Love, Laugh, Write! at 2:35 PM

You know, I've never read anything by this author, but have often wondered if I'd enjoy his work. Now that I've read your review, I'm going to give him a try!